By Dawnrazor
Trails
2 years ago2 Comments

The South Downs Way is a 100 mile off road route that runs from Winchester to Eastbourne and is a regular feature on the MTB challenge calendar. I visited the area a few months back and rode from Arundel to Shoreham by-Sea and back. It was a great ride and I promised myself I’d go back and ride more. This time I rode West from Arundel on a 30 mile circular loop.

My start and finish point was the Hilton Avisford Hotel. One of the reasons I can get away so often to ride, is that I promise my wife a nice relaxing weekend away, staying in a nice hotel. She used to ask why I was packing the ebike, but now she just smiles and tells me ‘It will cost you a bottle of wine’. A small price to pay for wedded bliss and a day’s mountain biking. 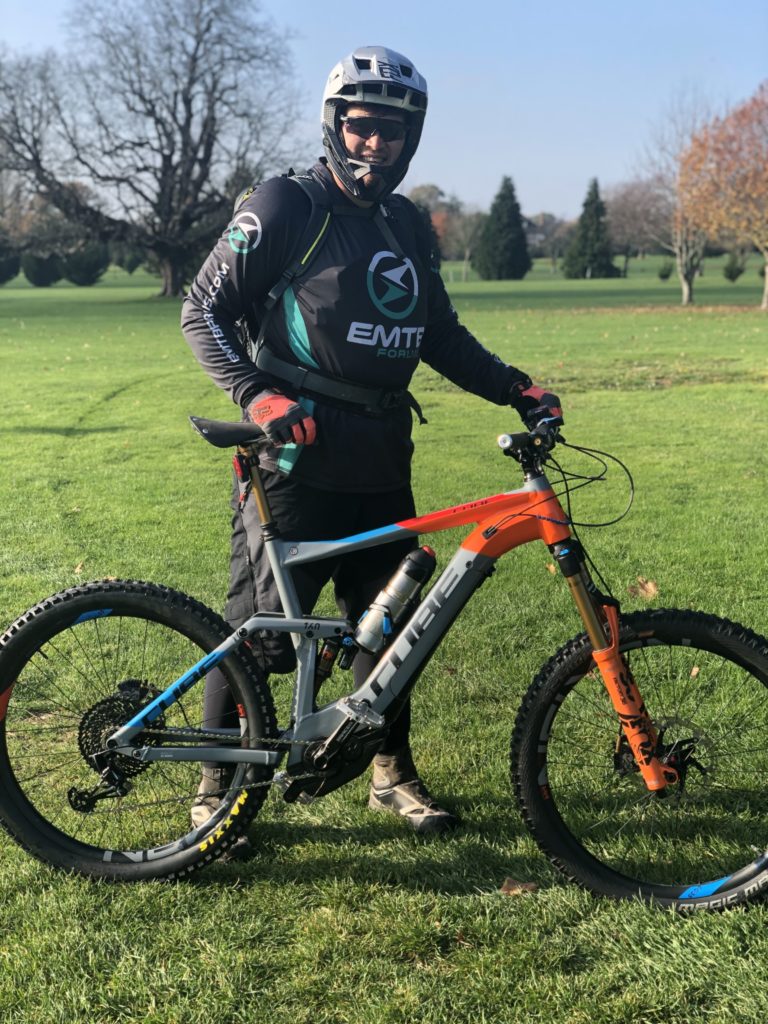 The route starts off easily through Binstead and Rewell Woods. It was a sunny day, but everything was still very wet from the recent storms. The bridleway was covered in leaves so made it slippery in places. I run a Maxxis Minion DHR on the rear and had just replaced it, so I had plenty of grip. You just have to watch out for the hidden stones and logs. 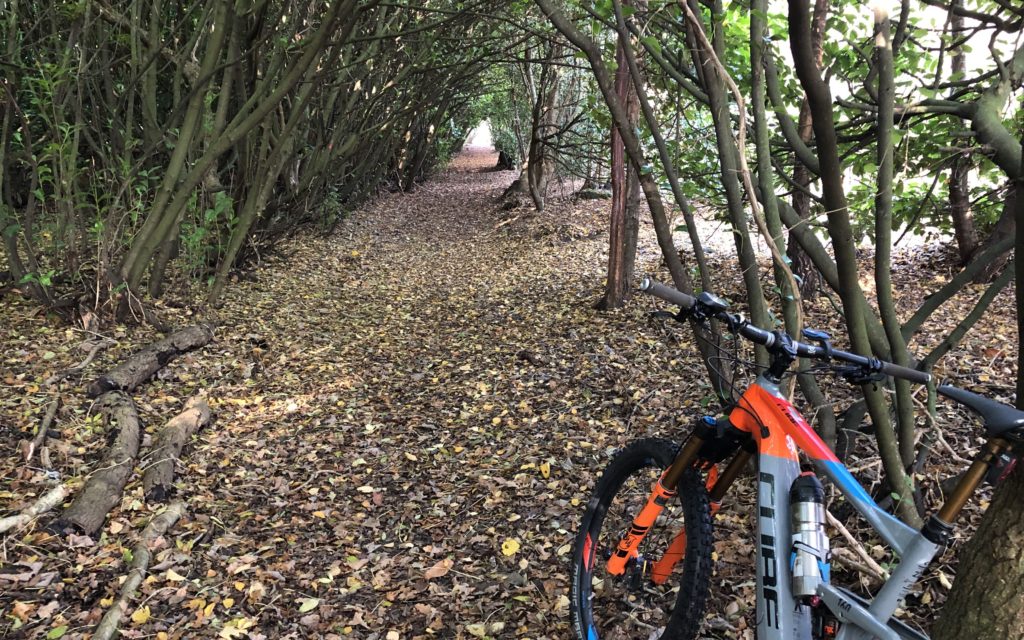 Except for one short downhill the first 7 miles are uphill. This is what the ebike was made to do. Despite using a considerable slice of battery, I made it to the top of Sutton Down in about 50 minutes. I was using eMTB mode on my Bosch system, which has quickly become my go to riding mode. I know a lot of riders use Eco and try and get maximum distance from their batteries but I’m not in that camp. I Have the Power! I don’t think my bike has ever purposely been in Eco mode. The downside is that I always have to carry a spare battery, but that’s something I am used to now.

Overall the riding is worthy of a blue grade. Nothing too technical (just be careful crossing the main roads). It was actually a nice change not to have rock gardens, huge drop offs, deep ruts and other features constantly trying to kill me. Other than the distance this would suit most riders and for all the ups on this ride the downs certainly make up for it. The downhill sections are long, straight-ish and you can go flat out. The section from Heyshott Down towards Charlton is approximately 3 miles of downhill. You don’t even need to cover the brakes. Managed to keep at 30mph for some distance.

There were sections where the track was completely submerged. Long and deep puddles. There were ways around, but I decided to go through them. I have always been a bit wary of submerging the motor, but it seems to cope with very short dips ok. I guess when I get it serviced next, I’ll find out for sure. I would hate to think my ebike can’t do something a manual bike can. 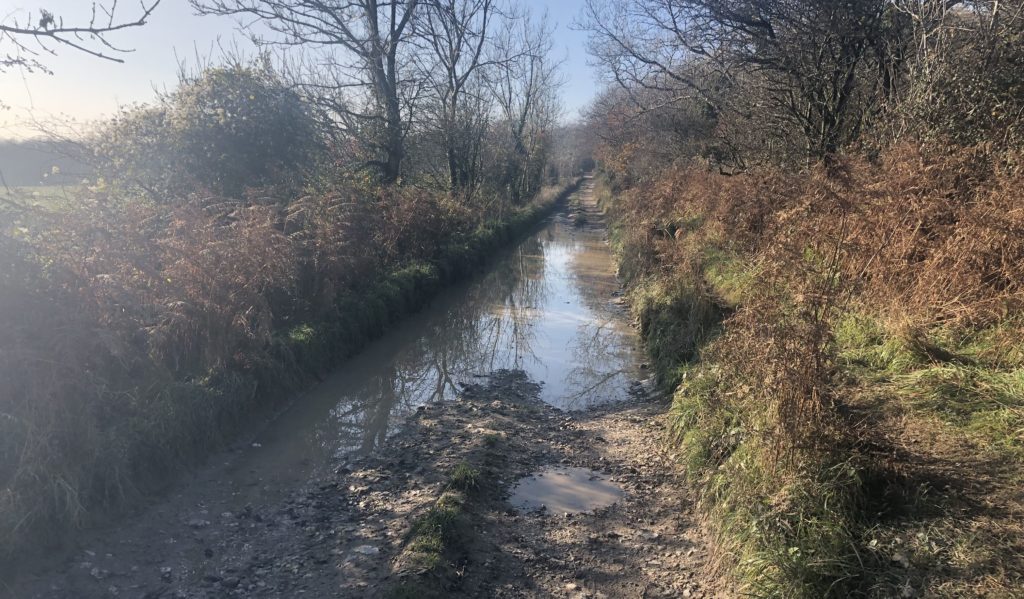 There are so many bridleways and routes in this area of the country that I had to keep a close eye on the navigation. I made a few wrong turns but the ViewRanger App I use on my smartphone quickly shows you when you’re going wrong. I passed so many other tracks that just begged to be explored.

There are quite a few wooded sections which make for some great single-track riding. One of the last is Halnaker Park. It is here I met my constant nemesis. The Grey Squirrel. My continued battle with this creature has made me believe I am some kind of Squirrel Whisperer. They throw themselves at me and under my wheels in a ritual self-sacrificing way, with no apparent care for their safety – or mine. I had one jump from a branch and it sailed under my helmet visor. If I had been quicker, I could have caught it my mouth. I came off once under the onslaught. I will get my revenge.

On the final couple of miles back to the hotel I saw two other bikes coming up the hill towards me. They were going for it. As they passed me, I smiled as I saw they were both on ebikes. It would have been good to stop and chat, but we were all having such a great time – a passing ‘HI’ had to suffice. Finally made it back in under 3 hours and 3 bars left on my second battery.

A Tale of Two Trails

By Dawnrazor
In Trails
2 years ago

I think the total distance of the South Downs Way can put some people off from coming here to ride. Don’t let it. It is fantastic riding and there are many shorter sections that can be done. I will be going back and next year I plan to do the whole thing in a two-day ride. Just have to save up for the five bottles of wine!

If you do start/stop at Avisford Hotel just watch out for the 25 foot crocodile. 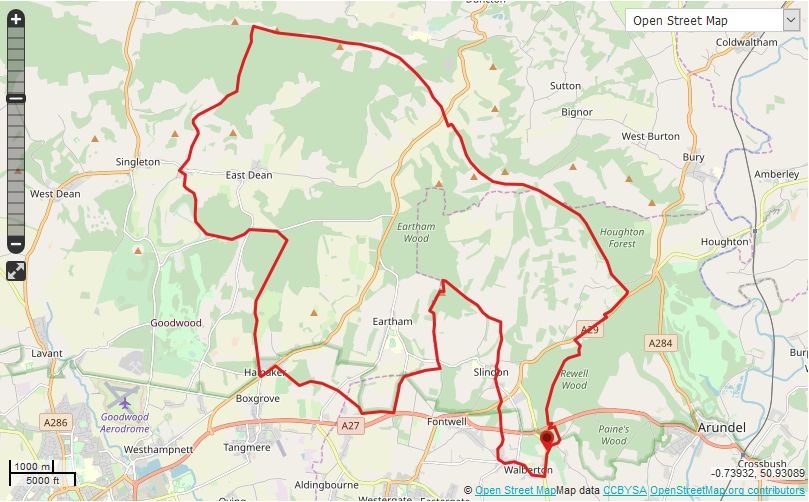