The new Trance E+ with the frame integrated battery is a good looking bike. It replaces the old Giant Full-E, and geometry wise it’s quite different. The Trance E+ frame is both longer and lower, and the head angle is slacker. Thankfully they’ve made the seat tube shorter, so finally I can use the size L frame with a 125mm dropper post. I was a bit surprised to see a 7mm increase of chainstain length though, up to 470mm. The short headtube can give a pretty aggressive seating position for some and the bike can be less comfortable on transport sections. The test bike is a size Medium, and it feels a bit small for it’s size.

Giant charges €4.599 for the Trance E+ 2, that puts it in the cheaper end of the spectrum. So I was a bit surprised when I had a look at the specs. Sure, the Shimano MT520 4 pot brake isn’t top of the range, but I’m happy to see them on this bike. The brake lever action isn’t as light as the more expensive brakes, but it’s a powerful brake that is up for the long descents. I’m equally happy to find the Fox 36 Rhythm fork. I usually find the Rockshocx Yari in this price category. The 36 Rhythm strikes me as more refined. They’re equally composed and sturdy on bigger hits, but the Fox feels a bit more active on the smaller bumps. The Trance E+ has of course got a dropper post, it offers 125mm of travel. The drive train is an 11-speed Shimano SLX/XT with an 11-46t cassette. 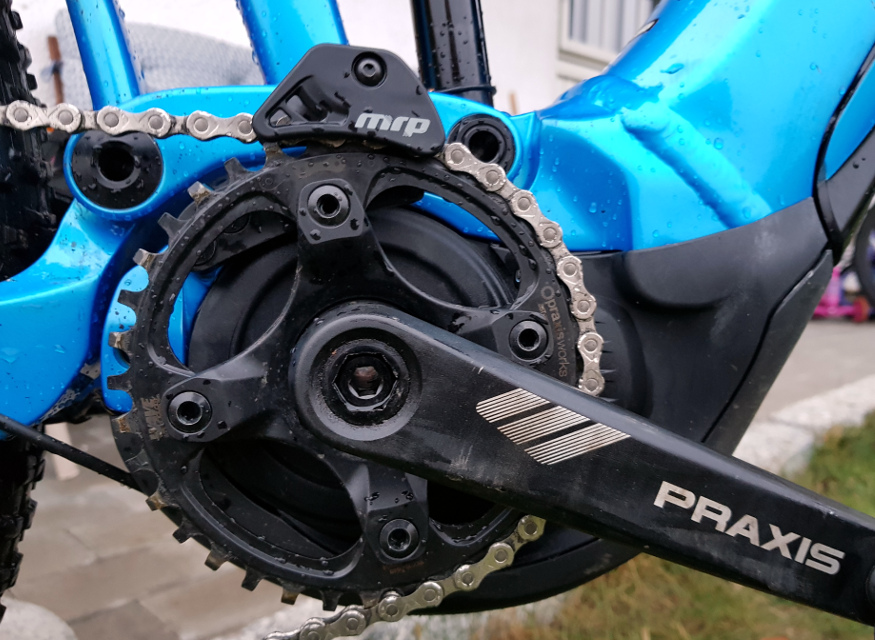 The 36t chainring is a good match for that cassette. Shimano is putting 34t chainrings on it’s motors, but we’re now seeing cassettes with up to 50t cogs, so I appreciate a bigger chainring. The Maxxis tyres use the slightly cheaper dual compound rubber. These tyres offer good support and grip on hard packed and dry surfaces, but I’m lacking grip on the wet autumn trails. Particularily the Maxxis Rekon rear tyre is lacking grip in these conditions due to the combination of harder rubber compund and small tyre knobs with little spacing. Tyre dimension is 27,5×2,6″.

Giant Syncdrive Pro is the name of the motor. This is a Yamaha PW-X that Giant has made a few changes to. Syncdrive Pro has got 5 different levels of assistance and some of the changes Giant has made is to the 3rd and 4th most powerful levels. These have been altered to deliver the same maximum motor power as the highest assistance level, you just need to pedal a bit harder on level 3 and 4. Also you get support on higher cadence (pedaling frequency) in level 3 and 4 compared to the Yamaha. The behaviour of the Syncdrive Pro is basically the same as the Yamaha PW-X. The motor is activated just by applying force to the pedal, the pedals doesn’t have to move at all. Syncdrive Pro is a quite powerful motor, especially at low cadence, and still it’s easily controlled. Syncdrive Pro is among the best motors I’ve used for technical trails. The noise level is in the same league as the Bosch Performance CX and Shimano E8000 motors, but the sound from the Giant doesn’t turn into a louder whine at higher cadence. Here’s a video review of the motor.

This bike has no display, only the RideControl One panel.

The PowerPak 500 battery is made by Giant. I immediately notice it’s quite heavy, and I don’t really understand why. Other 500Wh batteries for frame integration can wheigh less than 3kg, this one is 4.4kg with the frame cover that is attached to it. Did Giant decide to save €€ on the battery so they can sell a well specced emtb for €4.599? No, this is an all new more intelligent and safe battery says one of the engineers at Giant. A couple of years ago a new standard for safe batteries emerged, the “EN 50604-11”, and Giant is an early adaptor. This battery is built to be tougher, safer and to lastlonger.

Trance E+ 2 comes as standard with the “RideControl One” panel. This is where you turn the bike on/off and adjust assistance levels. There are lights indicating battery charge and selected assistance level. There is also an app called RideControl, it lets you connect your phone to the motor via Bluetooth. Here you can plan your ride and let the bike control the motor power to ensure you don’t run out of battery before reaching your destination. The power of the different assistance levels can also be tuned in the RideControl app.

I appreciate having the opportunity to tune the assistance with an app, but the predefined settings in the Giant motor worked really well for me, so I mostly rode with the original configuration. Some people will appreciate having a display to show info such as speed, and Giant has a solution. RideControl Charge og EVO are two different displays that will provide more info, and one of them supports notifications from your phone. Read more about them here.

Even though the battery is quite heavy, the total weight of the bike isn’t too bad. Trance E+ 2 is 23.9kg with pedals, and that’s quite normal for a bike with a down tube integrated battery. Emtbs with this kind of integrated battery in an aluminium frame will need quite a bit of reinforcement to compensate for the big part missing from the down tube. That will increase the frame weight. But it seems Giant somehow has made a pretty lightweight frame so the total bike weight ends up being average and normal.

It feels like the heavy battery does raise the centre-of-gravity a bit though. Paired with the fairly long chainstays you get a bike that feels a bit heavy to maneuvre through tight corners. The Trance E+ 2 feels stable and the motor and geometry makes it a great climber in steep and technical terrain. And as speed increases going down hill, the bike gets more lively.

When washing the bike, you will get water around the lower shock mount, this will not affect the bearing life time according to Giant.


The Giant battery is designed to meet the “EN 50604-1” standard. This standard was made in 2016 to improve the safety of pedelecs (ebikes) and other light electric vehicles. The Energypak 500 has 40 of the regular 18650 cells that makes a 500Wh battery. These cells sit in a aluminium casing with extra reinforcement. The space between cells has been doubled to allow for better cooling and to make room for multiple temperature sensors. These sensors provide a more detailed status for each cell and the charger uses this to regulate charge speed and to terminate the charge process if an error occurs. Charging is done with 6A up untill 60% state of charge (SOC), this takes 90 minutes. Charge speed then tapers down and it takes 3hrs 40mins to reach 100%. Charging this way improves both charge speed and battery health.

2019 Giant Trance E+ 2 Pro Review
Conclusion
The new Giant Trance E+ 2 is a well specced and safe bike. The frame geometry makes it feel more safe/stable than playfull, and the newly developed battery is made to be as safe as possible during use and recharging. The fork and brakes are a nice surprise on a bike in this price range.
Plus
Nice motor
Good components
Minus
Rear end a bit long
Center-of -gravity a bit high
4